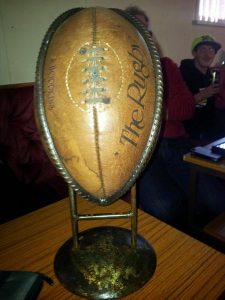 Llanelli Warriors deservedly achieved their third victory in five editions of the annual England v Wales mixed ability rugby international game. With the battle of Burry Port, after 80 minutes of great rugby, the home team avenged their national side’s defeat prevailing over the Bumbles for 37-10.

The Bumbles scored only two tries, but showed a fierce spirit and a great teamwork, which they must be proud of. All the players did their best, supporting each other and playing according to the Spirit of the Game.
Outstanding, among the others, were the performances of Ahsan Sakandar and Martin Sands, who came close to score its first international try.

In this way, once again the home ground remains unbeaten, and the Welsh lead now the series 3-2, and they must be considered as the main contender for the final victory in the 1st Mixed Ability Rugby World Tournament, to be played later this year in Bradford.

All the Bumbles compliment the Warriors for the admirable game delivered, and already look forward to next year’s fixture… unless the fate does not make them face each other in August!<