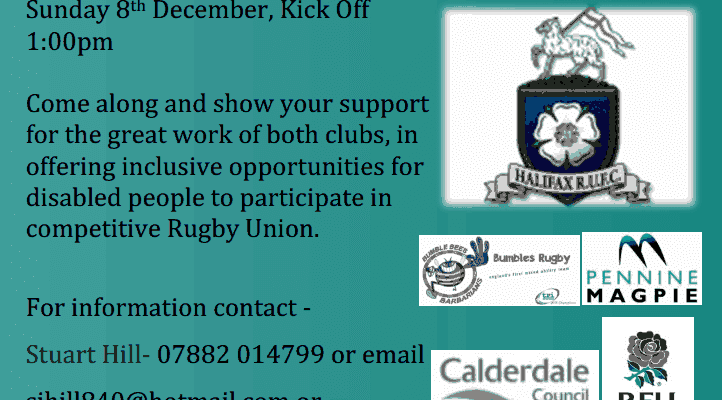 This weekend sees the first ever Mixed Ability Rugby Union clash between two English teams as the newly formed Halifax Magpies host the Bumbles.
The Halifax Magpies who have been mentored and supported by the Bumbles during their development, become only the second side in Yorkshire and England to form an inclusive squad of players with and without disabilities playing contact Rugby Union. The two sides meet this weekend on Sunday 8th of December for a 1pm kick off at the Ovenden Park Ground (Keighley Road, HX28AR)
Wrap up well and come along and show your support!

The first game between two mixed ability English sides was a really entertaining game with both sides showing the potential of the sport for all levels and abilities.

The Bumbles decked out in their Remember Us strip and the Magpies decked out in red made for a bright colourful spectacle for the spectators, and after a conduct talk to both teams kick off, and we were underway.

The Bumbles soon got the ball and the experience of playing together came through as the forwards drove into the Magpies who struggled under the pressure.  The Bumbles forwards led by Kev, Mark, Lee, Rupert and Paul linked phase after phase ( 9 in all ) heading for the Magpies 22, then were stopped by a massive tackle on Si. The Bumbles won the resulting  scrum and a set piece from the training ground paid off as the rampant number 8 Ryan Kirby picked and went from the back and with the pack driving him forward from the quick  peel off it was a try Magpies 0-5 Bumbles.

The next period again say the Bumbles dominate this time through the backs, the forwards were holding the ball well allowing some great ball out to the stand in 10 Josh who stepped up to the roll magnificently. A quick ball down the line and a pop off the back from Si to the mighty Tigger who with no small degree of panache cut inside and sliced through a static Magpie defence and under the posts. Magpies 0-12 Bumbles.

At this point the Bumbles had a change over bringing in the subs, the Magpies rallied and pounded the Bumbles and scored some fantastic individual tries at half time the Bumbles were trailing 17-12.
After an inspiring team talk from the Bumbles President Dave Morris, fresh out of retirement for the game the second half proved what fantastic sport rugby is for all. Everyone was involved on the ball, supporting the player going forward and the facilitation was outstanding by both teams. Bumbles levelled the score through a diving try from Martino, only to drop behind again as the Magpies surged forward. 22-17. Then Daniel got the ball on the Magpies 5m and with the pack driving him home he planted the ball under a pile of bodies TRY 22-22!!!

With 5 mins on the clock the Magpies wanted their first win and smashed the Bumbles defence but failed to break through, a draw was imminent when out of nowhere a drop kick pushed them into the lead 25-22.

The scene was set for a mighty climax, I don’t know if the Bumbles had been inspired by watching the All Blacks win against Ireland or after all the games played they knew to play to the final whistle. They won the ball from the kick off. Seconds on the clock, Si urged the pack to Bulldog right to get field position and Darryl dropped into the pocket then a penalty to Bumbles!

The captain for the day Leon, back from injury stepped up and took on the responsibility of getting the draw. And as cool as you like stroked the ball through from 22 meters.

What a game, many thanks to Halifax for hosting the Bumbles and playing such a fantastic game.

On the Bumbles side man of the match goes to all the forwards, they were an believable with only 3 facilitators to play like that, linking phases, keeping possession and listening to the calls from the scrum half shows how far we have come. And for an opening game the Halifax number 2 was brilliant scoring 13 points.

Follow me on Twitter
Tweets by @BumblesRugby
Whether you fancy playing, volunteering or supporting, you can be a part of inclusive sport with Bumble Bees RUFC...
GET IN TOUCH
© Copyright Bumble Bees Mixed Ability Rugby. 2020 - All Rights Reserved. Charity No: 1158351
×Close search
Search
This site uses cookies: Find out more.