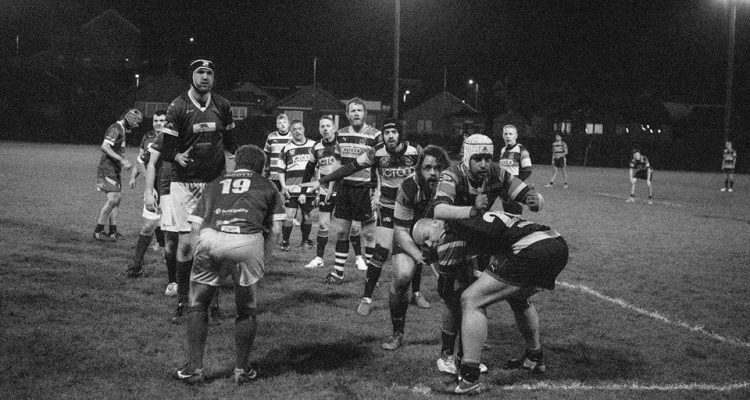 This was the 9th annual meeting between the sides who contest the H Bomb Cup. Although neither side has been able to win the game away, the matches have traditionally been close and the Warriors lost by a point back in July. All were set then, for another titanic struggle, with two healthy sized squads named.

It was no surprise that the contest was pretty even throughout and from the early stages it was a hard fought battle. The Warriors had slight territorial advantage early on but couldn’t get a breakthrough. The Bumbles might have been in their own half most of the time but had several breakouts that might easily have resulted in scores. The tension seemed to get to some players with some uncharacteristic mistakes but it was still very absorbing.

What was apparent was that the sides knew each other well with big players like Lee Hainsworth (Bumbles) and Simon Day (Warriors) heavily marked. With both sides looking to counterattack whenever possible, kicking was a dangerous option with the Bumbles especially sharp in the back three. This meant both sides looked to their big carriers to make ground and it certainly wasn’t a place for the faint hearted as an attritional battled developed.

The Warriors pressure, with Tomos Hall to the fore, forced numerous penalties and in the end the referee felt he had no option but to award a penalty try.

It was straight back to the trench warfare though until eventually the Warriors worked Thomas Edwards out wide and he scampered over for the games opening score proper which was successfully converted.

The Bumbles upped their efforts and pressed the Warriors back down field. a number of forward rumbles eventually resulted in them driving over the line and from underneath the bodies a try was awarded.

14-5 at half time and with plenty of fresh players from both sides there was no let up in intensity. Paul Whyatt was impressive for the Bumbles and Michael Whitaker had a fine game. For the Warriors Thomas Ashour ran hard and Lloyd Crowley showed some neat touches.

Into the third quarter and the Warriors scored again, Jamie Evans breaking a tackle and scooting over.

With time running out, the Bumbles redoubled their efforts and pounded the Warriors line. Will Tomlinson rampaged through some tired defence but a missed conversion meant the Warriors were two scores clear. Tomlinson again broke through and this time the conversion was good.

With their lead but to two, the Warriors had to redouble efforts and held on to seal the win.

The next day, both sides travelled up to Cardiff with the Warriors facing Cardiff Quins and the Bumbles facing the capitals mixed ability team, the Cardiff Chiefs. After the excursions of the night before perhaps it was no surprise that both teams lost. The Warriors shipped 45 points to an impressive Quins team but scored 3 good tries of their own. It was familiar faces with Evans, Edwards and a guesting Tomlinson crossing the line. Dylan Crolla impressed on the win and Youseff El Taweb was named man ofthe match.

The weekend was again triumph for inclusive sports with three quality encounters again demonstrating that disability need not be a barrier to full participation.

Hell of a battle of a game. Great to see Josh Crowther back in Warriors colours in amongst a jumbo squad of players – hopefully all felt that they played a part in the match, it was very difficult to organise. It was a great game with some big hits and plenty of excitement.

Tomos Hall was deserved man of the match but mention to Yanis whose tackling made a huge impact in the second half. Just to emphasise the physical nature: Fudge, Lloydipop, Hapus and Daydream all had to leave the field with knocks. Fussy also picked up an injury but that was in the warm up – courtesy of the Tominator.

Back at the clubhouse there was the usual presentations and then some 6 nations games, organised by Jamie, that apparently the Warriors also won.

It was into town for the night – and the girls with shiny beads, and karaoke in the Met bar and other dirty deeds