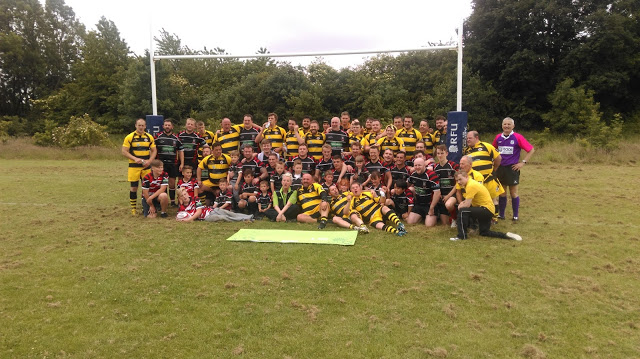 Mosborough  RUFC  ( with some SY Police players) waited patiently, excitedly, nervously. The changing rooms had been scrubbed clean, the grass had been mowed and the beer had been refilled (Very important).  At 11:30 (before planned) the convoy of ‘foreigners’ from the West of the region rolled into the car park.

The opponents were not a type of team that Mosborough had previously faced. They were the Bumbles. A mixed ability team from Bingley that included players with and without learning disabilities.

The club had been prepared perfectly and reasonable adjustment had been considered, such as taking those who couldn’t walk a long distance, by car to the pitch. Despite all this, the Mosborough players still were wary of what the game would look like. Would it be just a jog and a cuddle? Would it be tokenistic?

After a warm welcome by Mosborough and far too much cuddling beforehand (by Bumbles new player, Giddy) the team changed. The away side emblematic of its namesake in bright yellow and black stripes and the home side in jet black with blood red flashes, they headed over to the pitch. I swear it was about a 15 mile hike there and this out of shape Bumble was ready for a rest.

However, no rest for the wicked and both teams warmed up together. Mixed in as one, the home side were fantastic at integrating the away lads and ensuring no groins were pulled, no matter how many pretty ladies were on the touchline.
Next came the first real work. Mosborough as most team do when playing the bumbles, had a wide range of questions and the best way to answer these was to have a quick game of “pick and go” and touch and pass. The answers came quickly.

Kick off came and the teams lined up. Prestigious premiership official Robin Goodliffe was in charge and from the outset drew his lines of authority. The teams had decided on 4 quarters of 20 minutes in the South Yorkshire Sun which enable them to take water on board, kindly provided along with bananas, by the local Asda.

After pressuring the home line for a good 5 minutes, Mosborough got a little lucky. Running in two tries from distance and exploiting the commitment to attack from all 15 of the Bumbles. The Bumbles hit back with aplomb. 4 tries was the response, most converted by Big Lee Hainesworth and scored by backs and forwards.

The lead edged back and fore or the next 60 minutes with no team more than a try or two ahead. By now the home team were fully aware of the power and pace of the Bumbles and a few of the old boys were blowing out of their backsides after chasing and failing to stop new boys Giddy and Michael scoring on the wings.

Then came the last 10 minutes. With Mosborough leading by 5 the Bumbles scored the best try of their tenure as a rugby team. Some 7’s style magic ended with flanker and Italian love machine, Martino diving over the sacred line.

35 -35. 2 minutes left. The Bumbles forwards, relentless in pod work and pressure edged to the line. Two failed attempts ended with last season’s captain, Kevin Pringle ploughing over the whitewash. Big Lee converted for 42-35 and the ref blew the final whistle.

After many more hugs (from everyone this time) the Bumbles and Mosborough headed for the changing rooms and drink-up.

In the bar afterwards, pie and peas (and beans) were consumed and beer was downed – well sort of. Men of the match (Big Lee of the Bumbles and the captain of Mosborough – Jake Eyre) and Dick of the day (Cookie for the Bumbles – a number 8 kicking??? – and  Jamie Hollis of the home side) took their places for the downing of the obligatory pint of something disgusting and dark. Big Lee won of course with Cookie second. The Home side so let down by their players that Big Lee even had to finish downing their pints!