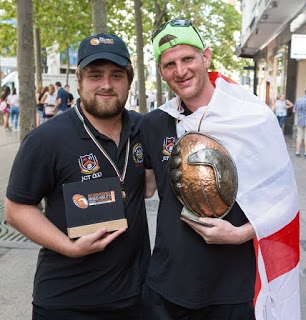 Bradford’s Bumble Bee mixed ability rugby team are to attend a civic reception at Bradford Town Hall on 8th November in recognition of their successes at the recent International Mixed Ability Rugby Tournament.  The Tournament was first hosted by Bradford in 2015 when the Bumbles lost in the final to the Irish team Sunday’s Well Rebels.  The 2017 Tournament was a five-day event hosted by the city of Vitoria Gasteiz in Northern Spain and was attended by 12 teams presenting all the six nations, Argentina as well as hosts Spain.

The Bumbles Bees arrived in Spain with a 25 players and facilitators backed up by two physios and 25 helpers and supporters.  Bradford University provided and funded three of their students to join the touring party and provide safeguarding to those players requiring the most assistance off the playing pitch.  The Bumble Bee team is supported by their Charity who raised nearly  £5000 from sponsors and benefactors to cover players transport and team kit.  Despite only winning one of their five matches the Bumbles made many friends and in many regards set the playing standard for other teams to emulate to achieve a very inclusive fully inclusive contact sport. Massive credit is given to their proud coaching team of Dan Cookson, Darryl Wilson Jake Goodwin, and Si Meyers.

The Irish again made the final but lost in hard-fought game to Argentina’s Pumpas.  The Pumpas were crowned winners at the closing event but the other two trophies were both won by the Bumbles. The team were voted by the referees to receive the Spirit of Rugby award for their fair play and sportsmanship.  In the world of mixed ability Sport this award represents the highest of accolades and was received with great applause by the team Captain Stephen Rhodes.  The award for players of the tournament is chosen by all the other teams and was awarded to a very proud “Big” Lee Hainsworth in recognition of his selfless hard running rugby but also for him having shaken hands and introduced himself to every player supporter and official he could find over his five days in Spain.

The attached photo shows Lee on the left being awarded his trophy and Stephen Rhodes on the right with the Spirit of Rugby trophy.  The Spirit of Rugby trophy stands very proudly in the Bumbles trophy cabinet at the Bradford and Bingley rugby club until it is handed back at the 2019 Tournament where ever that may be held.  The Bumbles are already preparing for IMART 2020.